Can a Nursing Home Require Arbitration in their Contracts? 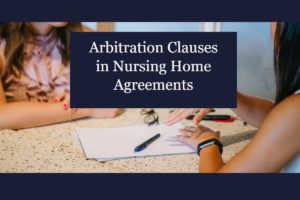 The Forced Arbitration Injustice Repeal (FAIR) Act aims to prohibit mandatory arbitration agreements in several areas of dispute including civil rights,antitrust, and consumer issues. Consumer disputes would cover nursing home contracts. Recently, the Centers for Medicare and Medicaid Services (CMS) issued a rule that allows nursing facilities to use arbitration to settle disputes with residents. In 2016, the CMS had banned such arbitration agreements. Beginning September 2019, these clauses are now allowed again; however, a new lawsuit has been filed stating that CMS does not have the authority to allow these clauses because of the FAIR act.

Historically,nursing homes required patients to sign these arbitration clauses in order to be admitted as residents. By signing these contracts, residents gave up their rights to sue the nursing homes for neglect, wrongful death and other civil disputes. Any disputes would have to be settled in private arbitration.

This new rule allows nursing homes to include this language in the contract, but precludes the nursing home from requiring the resident to agree to it and sign it as a condition of admittance. Many argue that most residents will not be aware of this issue and sign regardless. At Stouffer Legal, we care about our seniors. If you are thinking of entering into an agreement with a nursing home, please contact us at 443-470-3599 prior to signing for a consultation and contract review.