Should Your Will Contain an In Terrorem Clause? 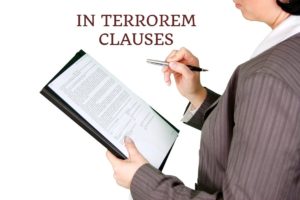 An in terrorem clause,also called a no-contest clause, may be added into certain legal documents,such as a Last Will and Testament. The clause is designed to threaten someone,i.e. invoke terror, hence the name, if they do not act or refrain from acting a certain way. The threat is typically in the form of either litigation or criminal prosecution.

Maybe you have considered including a “no-contest” or “in terrorem” provision in your will or trust, in the hopes that it will help maintain family harmony. The clauses specifically in the case of wills and trusts are intended to terrorize anyone who would otherwise inherit from filing any contests. They typically read:  "If any person shall commence proceedings to have this Will set aside or declared invalid or to contest any part or all of the provisions included in this Will they shall forfeit any interest in my estate."

Does this approach actually work? Sometimes, but seldom does it work the way it was intended. Why is that?

For starters, most wills do not need one because testators tend to leave everything to the beneficiaries in equal shares. The beneficiaries in this situation typically feel like the will is fair and are not as likely to want to contest anything. Another example when these clauses may not work as intended is when someone is disinherited altogether (i.e. they receive nothing at all). Again, the in terrorem clause is not going to prevent the child from contesting because he or she did not stand to inherit in the first place. Nothing to lose. Stating that they will be disinherited if they contest the will is not a deterrent in this situation because they were not inheriting to begin with.

Let’s try to make the ‘in terrorem’ clause work. If you leave the child you intended to disinherit something (a little bit of money,some specific bequest of artwork or personal items) and include the in terrorem clause in your will. Now the child has to consider his options. Contest it and try to inherit more or not contest it and accept what was given.

If conflict avoidance is important to you, there are many alternatives to in terrorem clauses that may better accomplish your goals of family harmony. To discuss your situation and learn more options, schedule a consultation with Stouffer Legal at 443-470-3599 in the Greater Baltimore area.